Java-based applications run in Java Runtime Environment (JRE) which consists of a set of Java APIs and Java Virtual Machine (JVM). The JVM loads an application via class loaders and runs it by the execution engine.

Java uses bytecode as an intermediate representation between source code and machine code which runs on hardware. Bytecode instruction is represented as 1 byte numbers e.g. getfield 0xb4, invokevirtual 0xb6 hence there is a maximum of 256 instructions. If the instruction doesn’t need operand so next instruction immediately follows otherwise operands follow instruction according to instruction set specification. Those instructions are contained in class files produced by java compilation. The exact structure of the class file is defined in “Java Virtual Machine specification” section 4 – class file format. After some version information there are sections like constant pools, access flags, fields info, this and super info, methods info etc. See the spec for the details.

A class loader loads compiled java bytecode to the Runtime Data Areas and the execution engine executes the Java bytecode. Class is loaded when is used for the first time in the JVM. Class loading works in dynamic fashion on parent-child (hierarchical) delegation principle. Class unloading is not allowed. Some time ago I wrote an article about class loading on application server. Detail mechanics of class loading is out of scope for this article.

Runtime data areas are used during execution of the program. Some of these areas are created when JVM starts and destroyed when the JVM exits. Other data areas are per-thread – created on thread creation and destroyed on thread exit. FThe following picture is based mainly on JVM 8 internals (doesn’t include segmented code cache and dynamic linking of language introduced by JVM 9). 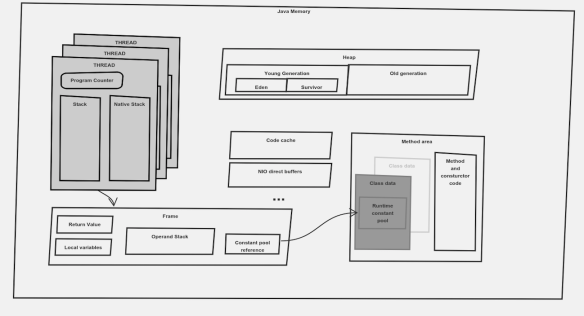 How the JVM execution engine runs is not defined by JVM specification so vendors are free to improve their JVM engines by various techniques, hotspot JVM is described in more detail and JIT watch gives insight into runtime characteristics.